Race, Colorism, Diaspora and Identity in Cali, Colombia — The Experience of a Traveling Black Caribbean Scholar in Colombia’s “Chocolate City”

Over the last week, I had the privilege of traveling to the South American nation of Colombia to represent Howard University’s Cathy Hughes School of Communication at the annual Caribbean Studies Association conference in Santa Marta, a resort town situated on the Caribbean coast of that country.

On my last two days in Colombia, I gladly accepted an invitation by my friend James of who is of Caribbean descent to ‘buss a lime” (hangout) in the city of Cali, Colombia which is one of that country’s Blackest cities. I was excited to take up the invitation as I wanted to satisfy my curiosity about the side of Colombia seldom seen by foreigners, who tend to traverse the touristy cocoons of its major cities and resort towns on the Caribbean and Pacific coasts. The two-hour journey to Cali by plane highlighted the vast geographical contrasts of Colombia. The tropical and very humid Caribbean coast of Santa Marta gave way to a very mountainous and temperate Andean Bogota, and a sub-tropical, Pacific region of Cali — replete with expansive valleys, and broad rivers which meandered through this densely populated city. After checking into my hotel and exchanging a few pleasantries with my friend, we ventured into the neighborhood of Agua Blanca on the Northeast edge of the city. Cali is 70 percent Black, but one would never know that to be the case because as a gringo visiting the town, you tend to stay in the Central district where the minority White population live in their luxurious high-rises with other trappings of wealth synonymous with any Western city. Dog walkers, joggers, five-star hotels, fancy nightclubs — the full complement. 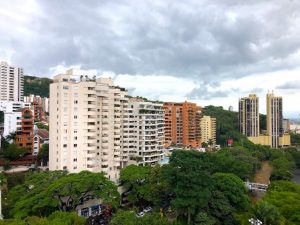 As we headed North of the central district in my friend’s car, we whisked past several other “nice” neighborhoods: an endless parade of brown and black scaffolding encased new high-rise construction en route; political campaign billboards superimposed the backdrop of the oddly placed traffic lights at every major intersection. The city is currently experiencing a period of rapid economic growth and is on track to become one of the fastest growing cities in Colombia and perhaps in all of Latin America. We suddenly made a right turn and came upon Distrito Agua Blanca, the location that I really wanted to experience on my trip. In this chocolate side of town, elegant high-rises and heavy construction were conspicuously absent. Well- paved roads degenerated into a veritable sea of potholes with crater-like formations at every turn. The region has also been experiencing unusually heavy rains over the last month. The rainy season usually ends in April, and for many locals, this might be attributable to climate change. The red-bricked houses that lines the unpaved streets and dingy alleyways were covered with hastily constructed galvanized roofs, and others with sheets of ply board and the occasional blue- colored tarpaulin. As we dodged potholes, my friend explained that each section of Agua Blanca has its nicknames, Haiti and Africa. If you lived in either of these areas, you stayed put and would never interact with persons from the other sections. As an outsider, daring to venture beyond the main street onto the unpaved alleyways would be doing so at your own risk.

These neighborhoods in Agua Blanca has the dubious reputation having some of the highest murder rates in Cali. The-intrepid reporter and scholar in me was all too eager to take photos of the Cali “hood” but was quickly cautioned to keep my phone out of sight, as drive-by robberies by gunpoint on scooters were a common occurrence. Our almost 40-minute journey ended when we came upon a Black-owned hair salon run by one of the only natural hair stylists in this part of town. The owner is also a friend of James, and she specializes in doing Black hairstyles. The stylist, Mariela, greeted me euphuistically with a tight hug and immediately began to inquire about my dreads. As the conversation continued, I quickly learned that there is a growing interest by Black Colombians to fully embrace their Black identity by sporting natural hair and dreadlocks, and listening to Soca, Afrobeats and Dancehall music. This new stream of consciousness is happening against the backdrop of a Colombian media landscape where the only Black faces emblazoned on television are those of Black football players and the modern day minstrel character Soldado Micolta whose role was only removed after a recent protest by Afro-Colombian civil society. The figures on the popular telenovelas and news broadcasts are all lighter-skinned Colombians who reflect the country’s Eurocentric past more than its current racially diverse makeup. 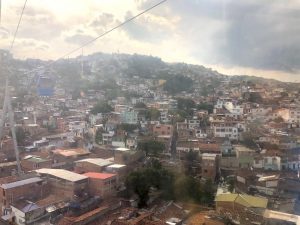 The Barrios of Cali, Colombia. A vast majority of city dwellers live in neighborhoods like these

Unlike the wealthier district where I was greeted with bemused looks for occupying spaces seldom frequented by local Blacks, the people at the salon and the nearby barber shop were all too happy to interact with a brother who proudly sported dreadlocks. The stylist was also curious about the types of oils, scalp treatments, and styling patterns that are in vogue in Black salons in the United States. I was all too happy to share my knowledge. The hair conversation for me represented a moment of pride and solidarity between two displaced Africans in the diaspora, whose ancestors were violently shepherded to different geographical regions to work as slaves for a racist, patriarchal enterprise whose legacy continues to haunt people of color across the African diaspora in 2019.

As with other Black communities the African diaspora, systematic neglect gave way to the presence of “ghettoes” and “shanty’s” in this part of Cali. Cali’s status as a majority Black city is also not reflected in its political and economic structure. In spite of these challenges, Mariela and others on her block have inculcated a spirit of entrepreneurship by starting small businesses. They have also gotten involved in the growing Afro-Colombian nonprofit group AfroEstilo which allows this marginalized population to tell their own stories, share experiences and celebrate their culture in a way that was not done in the past through traditional Colombian media. This new Black renaissance in Colombia mirrors similar movements in Bahia Brazil, Panama, and Honduras where African descendants are becoming more aware of their culture.

As we left Agua Blanca, I reflected on the shared history of Africans in the diaspora. Income inequality, structural racism, colorism, police and gang violence, and a plethora of other socioeconomic issues continue to define the collective trauma that may not go away in my lifetime. In spite of these realities, I still hold fast to Dr. Martin Luther King’s dream for post-colonial Western societies to truly reflect their democratic ideals. Black Colombia still has a long way to go, but they’re slowly but surely getting there. The new Black awakening currently taking place in Colombia presents opportunities for greater and more meaningful collaboration between all people of color in the Western hemisphere. It is important that we see ourselves as our brother and sisters keepers, as our struggles are all identical.